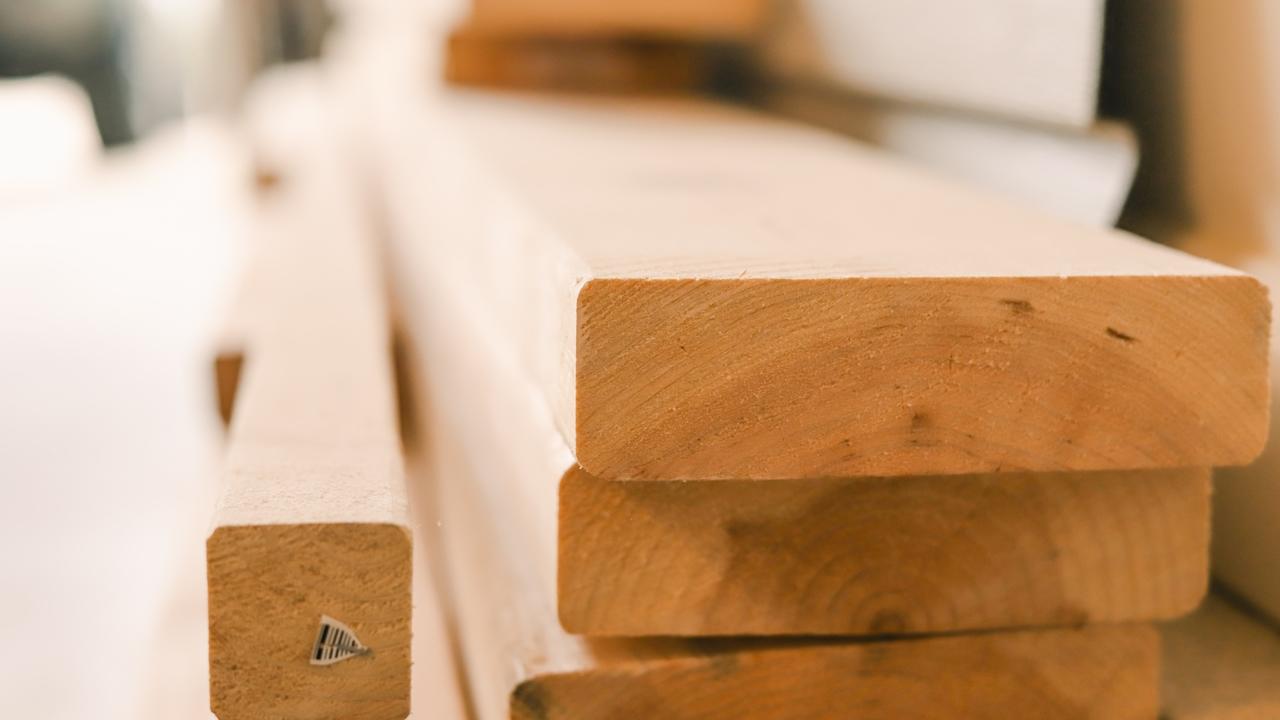 The construction of buildings today would be significantly more challenging without standardized materials. If every pipe fitting, window pane, and HVAC system had to be custom designed, the time and labor involved in building even a modest bungalow would be prohibitively expensive.

Standardization—the production of materials following uniform, industry-wide dimensions—has been crucial in allowing architects and builders to construct our modern cities, suburbs, and towns. Wood was among the first materials to undergo this process of standardization. Large timbers were transformed into a material used to build the structures of most American houses:  dimensional lumber.

What is dimensional lumber?

Dimensional lumber is cut and finished lumber (planed on all four sides) that comes in standardized sizes. These lumber sizes are typically described in inches in the United States and in millimeters in most other countries. The two numbers used to describe a piece of dimensional lumber—say, a 2x4, refer to its standardized width and depth: 2 inches by 4 inches (though those aren’t the actual dimensions—more about that later). The length of a 2x4 board can range from 6 to 24 feet.

Dimensional lumber boards made of American softwoods are the building blocks of frame houses, while hardwood lumber boards, also sold in standard dimensions, are typically used for flooring.

History of dimensional lumber in the United States

Until late into the 19th century, if builders needed to purchase lumber boards, they would visit their local sawmill and give them the needed dimensions. As the United States grew, however, so did the distance between builders and mills. Increasingly the beams and other supports of a wood frame building might come from a distant corner of the state or even further afield—lumber from Maine, for example, might be used to build homes in Boston. In order for the lumberyard and the contractor in Boston to know what they were purchasing, mills began to saw and plane lumber to certain standard measurements, like 2x4 boards.

At the end of the 19th century and the beginning of the 20th century, the increasing popularity of balloon and platform frame houses in North America (displacing earlier timber framing construction), provided another push towards standardization. Instead of the often irregular, large pieces of timber used in traditional timber framing, the structural integrity of balloon and platform frame houses depends upon smaller, standardized boards, spaced closely together to act as vertical supports.

Standard sizes for dimensional lumber began to be established, but the earliest ones varied from region to region, due to the different types of wood grown in each area, varying practices for processing lumber, and builders’ different construction methods. After World War I, as the economy of the US states, including construction, became increasingly integrated on a national scale, the need for nationwide standardized dimensions became apparent. Reaching that goal would be a long process of negotiations and compromises involving timber producers, mills, associations representing regional lumber interests, building trade organizations, and others.

You likely already know that a 2x4 is not, as its name implies, actually 2 inches by 4 inches. Instead a board that size is 1½ inches by 3½ inches. The first dimensions are its nominal ones—the name that everyone from the architect to the staff at Home Depot uses to refer to it. The second measurements are its actual ones.

The roots of this difference go back to the process of shipping lumber “green,” something that was more common with some types of lumber (like Douglas fir, common in the Pacific Northwest) than others (lumber from many pines, for example, needs to be dried quickly to avoid damage to the wood). Early in the 20th century, green lumber would be shipped cut to the 2x4 dimensions, but after it had dried out and then been planed, the final (non-standard) dimensions would vary. Now all 2x4 boards are dried, sawn, and planed before they are shipped—to the approximate final size (after drying) of an old 2x4 green piece of timber.

In the United States, lumber sizes are typically provided in inches. While metric measurements are not often used in America, they are provided here, alongside the nominal and actual widths and depths of the most common sizes of dimensional lumber.

Engineered wood is also sold in standardized sizes, though it is not dimensional lumber. The term is used to refer to different wood products in which wood particles, fibers, or other elements are bound together using adhesives or some other treatment. These include plywood, particle board, laminated timber and a wide range of other products. They have both advantages (flexibility in terms of sizes, it can be easier to work with, and it can be designed around engineer’s specifications) and disadvantages (humidity can damage some and toxic compounds are used to create others), but they are, simply, not pure wood.