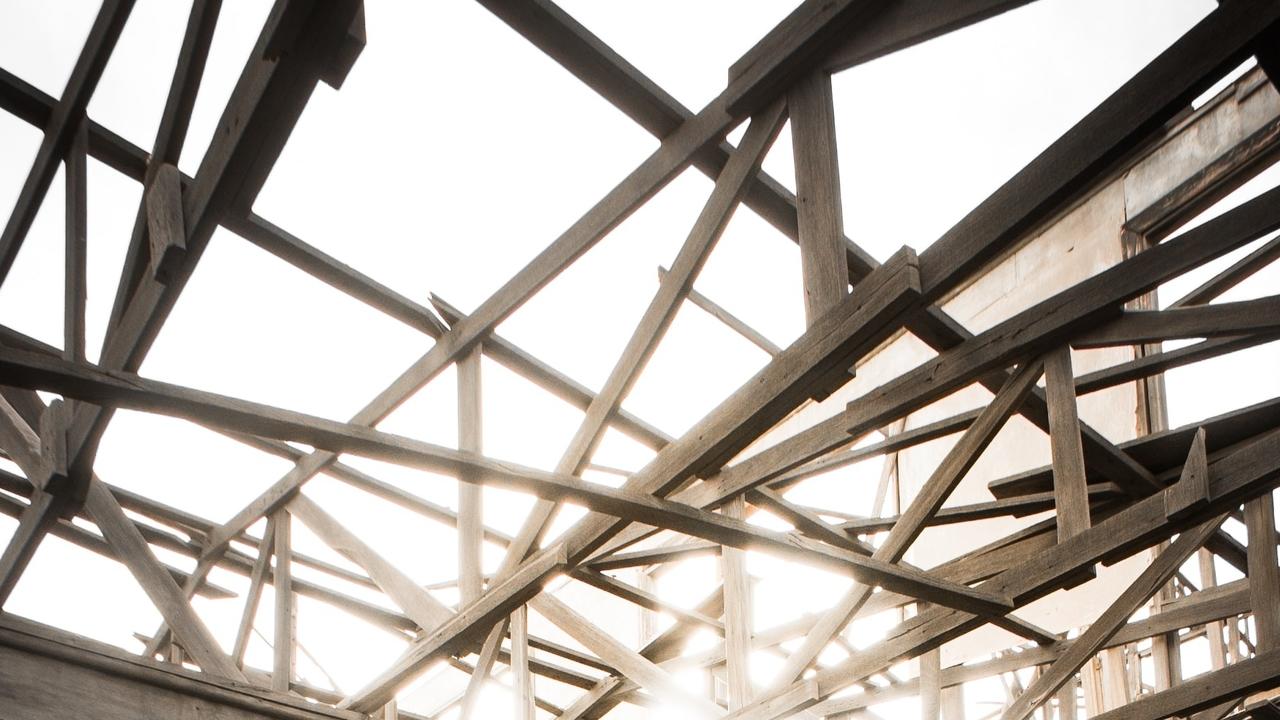 Light frame construction (known simply as “framing” in residential construction) is the technique of creating a structure based on vertical components, known as studs, which provide a stable frame for interior and exterior wall coverings. Horizontal elements, called joists, run the length of the floor, or between walls or beams. The joists support ceilings and floors.

Today, platform framing—in which each story is framed on top of the previous one—is the method of choice among most builders. Using one floor as the platform for the construction of the next floor creates a stable work surface. It also allows builders to use widely-available pieces of dimensioned lumber, versus the longer or more natural cuts of wood used in older methods.

Timber framing, which involves fitting together large posts and beams and connecting them with wooden pegs, was popular in the 18th and 19th centuries. In timber framing, builders work with natural logs and trees, rather than lumber pre-cut to common dimensions (like 2x4s).  This framing method fell out of fashion because timbers were hand-hewn, and the advent of machine-sawn lumber allowed builders to construct homes more quickly with standard-sized (dimensional) lumber.

In the 1830s, balloon framing became popular. This method involves using long, vertical 2x4s as studs, which extend from the sill on top of the foundation up to the roof, and which are secured by nails, rather than pegs. In balloon framing, a single stud could run up to 30 feet. The problem with using uninterrupted studs is the fire hazard: without breaks in the studs, a fire that starts low in the house can quickly shoot up to the top, razing the structure to the ground.

The most common framing technique in modern residential construction is platform framing, in which each story is framed on top of the previous one.

Builders will frame in one-story platforms of typically eight- or nine-foot-high stud walls resting on a subfloor—the platform. Each story is then framed on top of the next, and the roof rests on top of the construction. This method can be used for one- or two-story houses, and has become the standard among contemporary homebuilders because:

Framing is one of the myriad aspects of construction that are captured in a set of blueprints. Learn everything you need to know about reading blueprints in MT Copeland’s online class, taught by professional builder and craftsman Jordan Smith.

Here are common framing elements you will use in each part of the house:

Interior walls fall into two categories: load bearing and non-load bearing. A load-bearing wall supports a load from above, such as another floor or a roof. A non-load bearing, or a partition wall, is built separately from the main load bearing structure and can be an exterior or an interior wall. It functions as a divider but supports no weight. A third kind of wall—a shear wall, often used in multi-story buildings—is not built to bear a vertical load. Rather, shear walls are meant to resist lateral forces, such as wind and earthquakes. They are typically braced wooden walls with shear panels, reinforced concrete or masonry, or steel plates.

The elements of framing can seem complex, but by learning them and their essential value in constructing a solid frame, you’ll learn one of the most important steps of home building. Not only does a frame give the home a structure and shape, it is integral to every aspect of the construction that comes after it, from interior and exterior finishes, to laying in mechanical, electrical, and plumbing plans.