Nails vs. Screws: When to Use Each Kind of Fastener 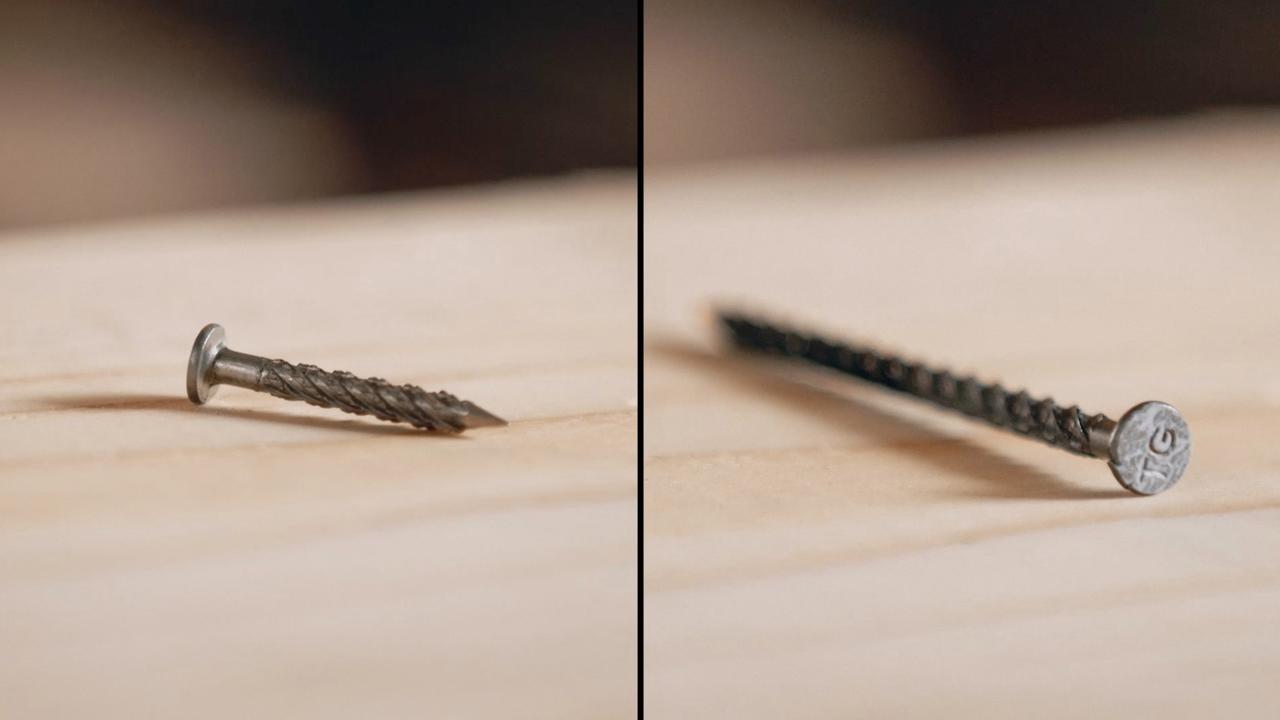 Nails and screws perform a similar function, and some types of nails (like spiral shank nails) even look like screws—which might lead you to believe that these two fasteners are interchangeable for construction and home improvement projects. They are not. Each one has different strengths and is best suited to different tasks.

Among the factors to consider when choosing between nails and screws are:

In general, screws have better holding power and superior strength than nails, and they are more easily removable. They can be used in almost all cases, except for when the fastener needs to disappear (here you’ll want to use finish carpentry nails), when speed is king (here’ you’ll want to use a framing nailer), and when cost is a major factor.

Nails are cheaper, faster to install, and easier to hide in finish details.

When deciding between screws vs. nails, the most important factor to consider is the types of pressures that they can best withstand.

Shear strength refers to the ability of a fastener or other construction element to withstand lateral, or side to side, pressures: Think of wind blowing against a house. This is where nails excel. Even if the pressure becomes extreme, they will bend rather than snap (as screws often will as they are typically made of hardened steel).

Tensile strength refers to a fastener’s ability to withstand pressures that pull a structure apart. Think of the fasteners used to attach a subfloor to a joist, where repeated deflections (that is the bending of the subfloor under a load) can cause a nail to work its way up and out of the subfloor over time. A screw, however, will hold, thanks to its threads.

When Are Nails Best?

Nails are cheap and fast, and are usually better for finish carpentry, since they are less visible than screws.

Nails are often preferable for large projects because they can be installed quickly with nail guns. They are also less expensive than screws.

With their thin shafts, nails are less likely to split wood making them a better option with wood molding and other details. Another plus is that finishing nails, with their small flat heads, are less visible than screw heads. There are, however, some situations where trim will require more holding strength than a nail can provide, and in those cases you’ll want to reach for a trim screw (which has a smaller head than a typical screw).

When Are Screws Best?

Screws have more holding power than nails and have a high failure strength that makes them well suited for high-stress structural projects. They’re also easier to remove.

Structural screws have completely replaced lag bolts and large nails for structural fastening, given their high failure strength. They’re also the better choice for non-structural element like a cabinet or handrail will be bearing weight. If the principal concern is preventing two materials from pulling apart, then screws are the better fastener.

While it is generally easier to install nails, it’s generally easier to remove a screw. This makes them the better option for many temporary projects. For example, if you want to fasten a board to a wall to support cabinets during installation, reach for screws before nails.

Drywall or gypsum board

Drywall or gypsum board will often crumble when a nail is hammered into them. Another advantage of screws with drywall is their holding power. Nails, with their smooth shanks, are more likely to simply pull out of it.

You’ll often use both nails and screws

With many projects, you’ll find yourself using both nails and screws. For example, with a deck you may use nails to attach a joist to the deck frame but screws to fasten the decking itself. Screws can also be used to repair and prevent head pop—the tendency of nails to pop out of the framing and penetrate a house’s drywall. And, as always, keep building codes in mind. They may dictate whether you should use a nail, screw, or other fastener in a particular situation.